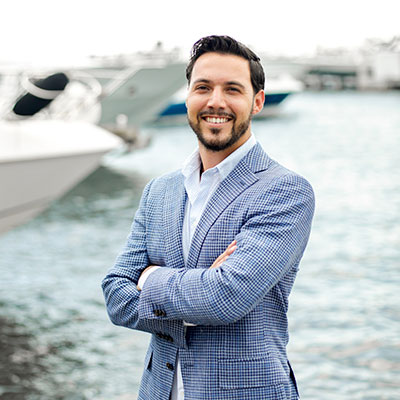 A Miami native, Jose Noy was born and raised in Miami, Florida, and studied at Florida International University. Growing up, Jose was fond of boating with his family and enjoyed water sports and soccer. With such an active childhood in and out of the sea, there is no surprise that Jose has carried his passions into his adult life, from boating at least once a week and snorkeling to going to the gym and learning about newly released boats and cars.

Asking my parents to attend the South Florida boat show every chance I got.” Jose has always shown interest in the boating industry; he quickly retained all information on the boats he had studied and knew in the future that he would use that knowledge when selling boats.

Selling his first boat, the 2001 Sea Ray 48 Sedan bridge, Jose Noy began his journey with Florida Yachts International in May 2018. To this day, Jose has successfully sold 44 boats.

Jose explained that if he were not a broker, he would “be working selling cars, preferably exotic cars as that is another big passion of mine.”

“A Ferretti Yachts 920 and a Cigarette Racing 42x are my favorite boats.”

Favorite Music to Listen to on the Boat?

“My favorite boat music is anything I can relax to. Music that clears my mind when I’m out on the water.”

Where is your Favorite Destination to Boat to?

“A local destination I most enjoy on the boat is Boca Chita Key in Biscayne Bay.”

What is your most Memorable Moment on Board?

“My most memorable moment on a boat was learning to drive a boat with my dad.”

What is your most Memorable Moment at FYI?

“My most memorable moment at FYI was working alongside some of the best people in the business and being able to absorb and learn from their collective wisdom and experience on both the boating industry and life itself.”

Any Tips for Future Brokers?

“The best tip I could give a future broker is continuously follow up. Sales don’t constantly happen immediately, and the big typically takes time. My first sale was following up with a client who had first inquired six months before his purchase.”