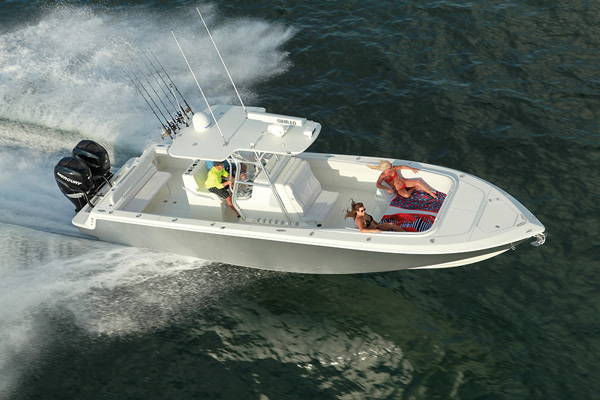 The luxury yacht industry in Florida is enjoying its most successful year, with record numbers of boats sold and registered. Multiple companies in Miami have reaped the benefits, saying that 2017 has been their best year in selling yachts and they expect more with over a month left and the Fort Lauderdale International Boat Show just concluded.

Statistics from the National Marine Manufacturers Association (NMMA) representing the nation’s recreational boat, engine and marine accessory manufacturers show sales of new boats 33 feet and over up 2.7% through August on a rolling 12-month, year-over-year basis. Association President Thom Dammrich has said that South Florida is one of the most popular places to own a boat due to the “superior weather and exceptional fishing,” making the area one of the top places to buy a yacht.

“Boating is integral to life in Florida. This is an industry that will outpace the rest of the country because this is integral to the state’s lifestyle,” Mr. Dammrich said. “Boating is also an appealing hobby, something a lot of people dream about.”

Mr. Dammrich and yacht sales firms have also attributed the increased sales to Florida’s stable economy. They said that because more people feel secure, they can afford to spend on comfort items, which includes yachts. Contrastingly, if the economy were to do badly, they said, boats would be among the first items people would sell.

“Banks have been flexible with financing and people are just buying. It’s one of the most lucrative years I have ever seen,” said Antonio Maldonado, president of The Advantaged, a company that charters and sells yachts. “The interest rate is going up, not down, showing strength for the economy and making people feel secure, allowing them to enjoy life and spend some dollars for comfort on a yacht.”

The Advantaged is flowing along with the high sales of the boating industry. Usually selling an average of 10 to 15 boats a year, by October the company has already doubled that number.

“This year has been the most amazing years we have seen in selling boats,” Mr. Maldonado said. “Everyone in our industry is benefiting right now. The hardest part is finding products to sell.” Previous reports show that sales of new powerboats, engines, trailers and accessories in Florida totaled $2.5 billion in 2016, up 4.7% over 2015, when sales ranked first in the nation. Last year, registrations in Florida amounted to 905,298 boats, 1.8% over 2015, when the state ranked first as well.

Data for this year are being recorded by the NMMA and will be released at the start of 2018.

Ralph Navarro, president of Florida Yacht International, which has been around 26 years, has said the demand in Miami for boats is much higher now. This year, the company is currently at $78 millions of sales, up from last year’s $64 million. Mr. Navarro said the company forecasted selling 140 boats and has already sold 115, the most ever.

He attributes part of the rise to friendly competition. When new competitors enter the market, he said, it is “not a cutthroat business” and companies do work together from time to time. He said a new group of buyers is entering the picture but they are a “trade secret.”

“Our sales are high because the economy is strong, gives people confidence to enjoy life more,” he said. “We also encourage people to try out the waters. It is a very relaxing life. When they experience the lifestyle, it is not uncommon for them to begin cultivating a dream of owning a boat.”